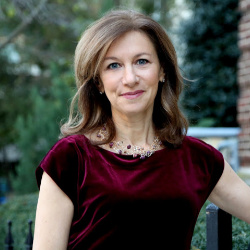 Karen serves on the International Digital Accountability Council (IDAC) Board of Directors.

Karen Kornbluh is Senior Fellow and founding Director of the Digital Innovation and Democracy Initiative at the German Marshall Fund. She served as U.S. Ambassador to the Organization for Economic Cooperation and Development and as a senior official at the U.S. Department of Treasury and the Federal Communications Commission, where she led a number of successful cross-government efforts on Internet policy.  She has published widely on tech and domestic policy in publications including The New York Times, the Washington Post, the Atlantic Monthly, and the Harvard Journal of Law and Technology as both Senior Fellow for Digital Policy at the Council on Foreign Relations and founding director of New America’s Work and Family program on renewing the social contract.

Kornbluh has worked in and around data from the start of her career as an economic forecaster and later as a consultant to manufacturing firms, including as a Senior Advisor at McKinsey. As Executive Vice President at research company Nielsen she created the company's privacy program and foundation.

Kornbluh served as policy director for then-Senator Barack Obama, developing the policy agenda featured in Audacity of Hope and his campaign platform. She serves currently as a member of the board of both the U.S. Agency for International Media and the Open Technology Fund and is an elected member of both the Council on Foreign Relations and the National Academy of Social Insurance. She was awarded fellowships by the Mozilla Foundation, the Markle Foundation, and the Center for American Progress and honored as an “Internet Policy Pioneer.”